A career in motion: an interview with Ant Svensk

Thirty-three-year-old Rooster Ant Svensk has spent over a decade working in motion graphics and animation. In his younger years you could find him clowning around in Hunters Street Mall, and he later worked on television shows like The Block and My Kitchen Rules.

Ant received his degree in Arts/Theatre. His plan at that stage was to become a theatre maker.

“Ten years ago in Newcastle you could put on shows whenever you liked. I was working with Livesite which was a precursor to Renew Newcastle. It was good; we were doing weird shit. We did clown shows in the mall; we used to get changed in the ally beside The Roost,” Ant said. “I went down to Sydney it was completely different. You could only do shows in theatre spaces. I needed cash, so I started working in TV.”

Along with his theatre background, Ant is a self-taught IT guru, something that’s come in handy. In Newcastle he’d take on the occasional IT job for a bit of cash. When his future wife moved to Sydney for university, he followed her. He arrived and wasn’t planning to get a job immediately in television, but he had a friend at Channel Nine who thought his knowledge of IT combined with his theatre background would make him a good employee. IT and theatre together equals video post-production, according to Ant.

“All TV people are starved creatives. They are really talented people who don’t look back because TV is not tremendously demanding of your creative talent, just your perseverance,” he said. “There aren’t many people working in TV who aren’t also working on a side project.”

Ant’s taken on a variety of side projects including photography, design, web development, Spanish and BMX repair and maintenance courses.

Ant started his job editing TV for broadcast and moved from there to motion graphics. He didn’t find the editing that challenging, but he enjoyed the problem solving aspect that came with attempting to quickly create a scene that didn’t have enough visual information. He witnessed the industry shift from old school to analog/digital, and he made a point of learning all the programs like Avid, Premier Pro and Final Cut.

He had a boss who was willing to take advantage of his eagerness.

“If I thought I could do something, he would let me do something until I failed, and I never failed. It was smart of him but dumb of me because it wrecked me. The last season I was working six days a week minimum, 14-hour days, and I only slept four or five hours each night.” Ant said.

His partner was working just as hard at uni and they would pass each other like ships in the night.

“I became a robot; I lost 40kgs; I built and burnt myself out of a career. All while I bought a house, got married and had a kid. Somehow I did those and had kind of two lives at once for about seven years. I wouldn’t suggest it,” he advises.

After eight years or so, Ant and his partner eventually made the decision to return to Newcastle, particularly after they became parents. 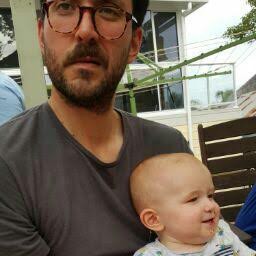 “Before we had him we were planning on staying in Sydney. We have a house there; it’s a great spot in the inner west. But we found that if you have child and you don’t have the support you start thinking about family differently,” he said. “We didn’t know if we wanted to raise kids in the city. I grew up running around in the bush making cubbyhouses and throwing stones at trees, and she grew up in Hornsby where it’s all trees also.”

Now they’ve moved back to Newcastle and are trying to get used to a slower pace. Ant’s original reason for joining the Roost was to launch a web hosting business, but he hasn’t had a chance to start because as soon as he joined the Roost, members had gigs for him.

“I have so much stuff on but the energy in this place helps me keep going,” he said of the Roost. “Everyone is working hard, everyone is juggling priorities and everyone still finds time for a laugh or a yarn a quick bite or a beer. It’s too positive to deny.”

As he adjusts to life away from the big city, he admits he’s still a workaholic, and he’s known for keeping long hours at the Roost.

“I can’t not do a good job, I want everything I do to be better than I’ve done before and better than anyone else who’s doing the same thing. I like the challenge to do good work,” Ant said.

The Roost welcomes Ant, and we’re happy to have him here any time of day or night!